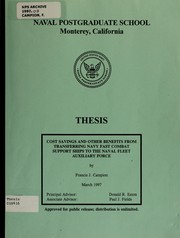 The U.S. Navy"s Fast Combat Support Ships (AOEs), which are the largest and most powerful logistics ships in the world, are designed to meet all of the logistical needs of an Aircraft Carrier Battle Group. Without an AOE, a battle group would lack the logistics support that it requires to perform its critical missions of global presence, power projection and sea control. Yet today, battle groups must perform these missions with smaller budgets than in the past. To relieve some of this fiscal pressure, the AOEs could be transferred to the Military Sealift Command"s Naval Fleet Auxiliary Force (NFAF), whose civilian-crewed ships operate at a lower cost than Navy ships. Transferring the AOEs to the NFAF could save an estimated $ 140 million per year.